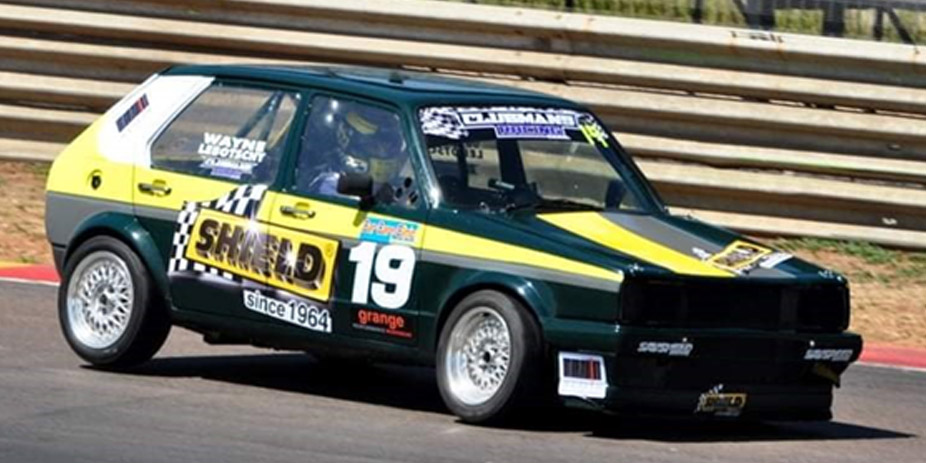 Spring has been a hive of activity with the Clubman Historic Inland championship taking place at Zwartkops raceway on the 11th of September and the Golf GTI Cup the following week at Phakisa Raceway in Welkom.

Great weather and a full field of around 25 cars as result of the combining of the Midvaal Historic and Clubman’s to do battle in the same race made for some awesome racing on the day. Considering the age of these cars it amazing to see how well they perform and the lap times they achieve. Needless to say, these are not standard cars anymore with 13-inch slick tyres, new managements systems and the latest gas guzzling twin choke weber’s money can buy.

Qualifying went well considering someone had dropped oil over the track on the out lap and following a clean-up and on a cement resurfaced track managed a 1.14.1 which was good enough for 6th on the grid.

Heading down into turn 1 and with 20 cars on your back bumper it can only mean one of two things thing, you will be losing a taillight or receiving paint marks on the back of the car. As luck would have it, I lost a taillight and received slight bump up the rear and knew I had to getting moving and create a gap. Creating a Gap was easier said than done as I had 2 GSX 1200 Datsun’s on steroids keeping me honest, managing to hold onto the back of my bumper lap after lap. Ian Kilburn and Gavin Lundin with chasing Travis Jensen in another Datsun made the race super entertaining as they are amazing under the brakes and make up so much ground before the tight corners. Fortunately for me I had a few extra horsepower on them and managed to get a gap towards the end of the race and winning class C and a  5TH overall .

Starting with a reverse grid meant I was at the back of class and had to make my way through the field if I wanted to obtain points. I had a feeling this was going to be a tough time ahead as these Historic boys weren’t going to give me an inch. Lap after lap I managed to gain a position and was starting to run out of laps as the race started counting down from 10 to 2 before the Lundin and Kilburn duo decided to do some sideways dancing in turn four and took each other out leaving me with Travis Jensen in my sights heading into the last lap.  I knew I had one more chance in turn 2 to make a move and unfortunately over cooked it and locked up giving Travis the gap he needed to pip at the finish line …what a race .

A formula for any Volkswagen GTI / Scirocco model all in modified format and run a Turbo and a 2 L multivalve and 8v Class.

Arriving late afternoon and with one session to test I took the car out and dialled in a 1.58.00 which I was extremely happy with as it was on old rubber.

Heading out on Saturday I only managed to qualify in3rd position overall on a 2.00.01 which was off pace which I put it down to not running new front tyres. It’s never the driver and possibly a lack of grip which was the excuse for my performance, however the time meant I was in the mix of things as most cars qualified on a 1.59 or 2.00 min flat.

Phakisa is a fast track and trying to get clean air into the air intake systems helps obtain some extra horsepower down the back straight with hope of you enabling to pull a gap on your competitors.

Wayne Masters a seasoned veteran was in front of me in a new Polo 6 multivalve and I managed to get past him on about lap 2 to be running 2nd overall behind Piet Potgieter in the newer Golf 6Gti .

Try to chase down Piet was asking too much and had my handful with Wayne Master and Gerhard Henning on my tail trying to pressurize me into making a mistake lap after lap. Wayne was starting to bridge the gap om me and felt I had enough of gap and pace to hold him off until the chequered flag. Entering the back sweep on the second last lap and just before the short corners entering the main straight, I experienced a puff of white smoke enter the car and sudden loss of power which is never a good sign. Unfortunately, this was the weekend run for the Shield Golf and had to put the car on the trailer.

Big thanks to Shield Team for all the support.

Inland Championship – Clubman’s @ Phakisa Raceway 9th and 10th April.
April 19, 2021
Shield Products
Latest News
Go to Top
We use cookies on our website to give you the most relevant experience by remembering your preferences and repeat visits. By clicking “Accept All”, you consent to the use of ALL the cookies. However, you may visit "Cookie Settings" to provide a controlled consent. Privacy Policy
Cookie SettingsAccept All
Manage consent

This website uses cookies to improve your experience while you navigate through the website. Out of these, the cookies that are categorized as necessary are stored on your browser as they are essential for the working of basic functionalities of the website. We also use third-party cookies that help us analyze and understand how you use this website. These cookies will be stored in your browser only with your consent. You also have the option to opt-out of these cookies. But opting out of some of these cookies may affect your browsing experience.
Necessary Always Enabled
Necessary cookies are absolutely essential for the website to function properly. These cookies ensure basic functionalities and security features of the website, anonymously.
Functional
Functional cookies help to perform certain functionalities like sharing the content of the website on social media platforms, collect feedbacks, and other third-party features.
Performance
Performance cookies are used to understand and analyze the key performance indexes of the website which helps in delivering a better user experience for the visitors.
Analytics
Analytical cookies are used to understand how visitors interact with the website. These cookies help provide information on metrics the number of visitors, bounce rate, traffic source, etc.
Advertisement
Advertisement cookies are used to provide visitors with relevant ads and marketing campaigns. These cookies track visitors across websites and collect information to provide customized ads.
Others
Other uncategorized cookies are those that are being analyzed and have not been classified into a category as yet.
SAVE & ACCEPT